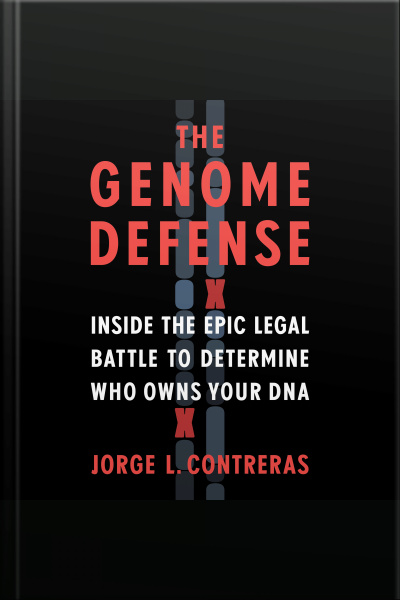 The gripping true story of a Supreme Court civil rights battle to keep biotech companies from owning our genes.

Today, we give away our personal information to websites, our data is routinely hacked, the images and texts that we post on social media are no longer ours. But what we do own—what makes us who we are—is our DNA. It would seem that no one could take that from us. Not so. The human genome was first mapped and sequenced in 2001, and by 2005, experts estimated that patents covered nearly 20% of the human genome.

In its hundred-year history, the ACLU had never filed a patent case, but it came to view the ownership of human genes as a fundamental civil rights issue. The Genome Defense is a fascinating behind-the-scenes account of a committed group of activists, scientists, academics, and physicians, spearheaded by a brilliant legal team. They sued Myriad Genetics, the company that patented the famous BRCA1 and BRCA2 genes—warning bells for hereditary breast and ovarian cancer—making the test for these genes unaffordable for many women.

Jorge L. Contreras, a professor of law and human genetics, introduces us to the key players in this important legal battle. He lays out the ACLU’s ground-breaking courtroom strategy in accessible and eye-opening detail, retelling early missteps to the final dramatic argument before the U.S. Supreme Court. He also describes the Obama Administration’s unprecedented involvement in the case, pitting the Patent Office against its sister federal agencies and embroiling personalities at the highest levels of government. Like The Immortal Life of Henrietta Lacks, The Genome Defense delves into the underbelly of our technological age of discovery, where the law struggles to keep pace with scientific advancement and corporate greed.