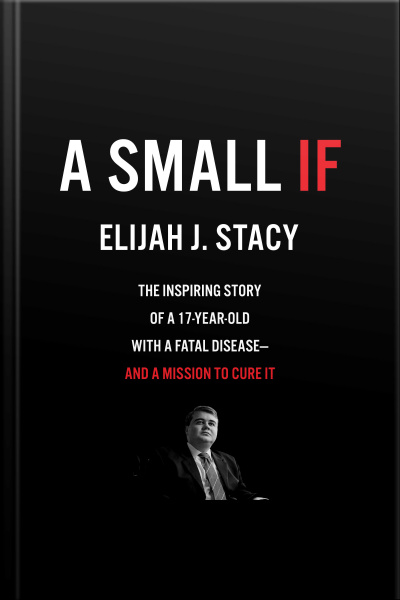 A Small If: The Inspiring Story Of A 17-year-old With A Fatal Disease—and A Mission To Cure It

How hard would you fight if you only had a sliver of hope?

Elijah Stacy suffers from Duchenne muscular dystrophy, a fatal muscle wasting disease. At the age of sixteen, to avoid agonizing surgery, he had to endure enough physical therapy to change the shape of his own spine. It had never been done before, but still, his doctor gave him a small “if.”

In A Small If, Elijah shares thirteen lessons he’s learned throughout his life’s journey of losing his ability to walk, getting bullied in school, losing his brother Max to Duchenne, and learning that his other brother has the same disease.

Elijah explains how to overcome extreme suffering by developing an adapter’s mindset, understanding what it means to control something rather than influencing it, and using other people’s negative energy as the ultimate motivation.

Today, Elijah’s mission to minimize human suffering and propel human prosperity is fueling his ambition to cure his disease. He’s been told he has less than ten years to live, but he’s faced long odds before.

Sometimes, all you need is A Small If.