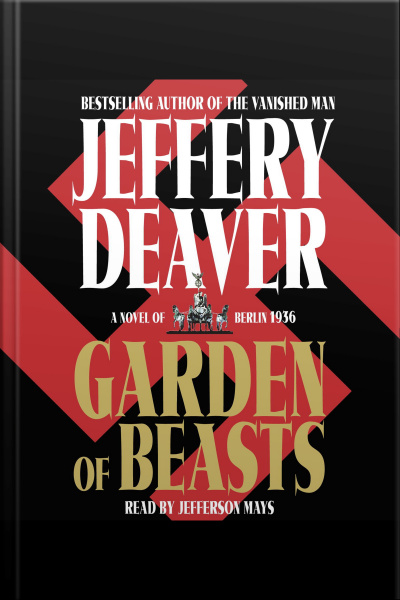 Garden Of Beasts: A Novel Of Berlin 1936

In the most ingenious and provocative thriller yet from the acclaimed New York Times bestselling author Jeffery Deaver, a conscience-plagued mobster turned government hitman struggles to find his moral compass amid rampant treachery and betrayal in 1936 Berlin.

Paul Schumann, a German American living in New York City in 1936, is a mobster hitman known as much for his brilliant tactics as for taking only "righteous" assignments. But then Paul gets caught. And the arresting officer offers him a stark choice: prison or covert government service. Paul is asked to pose as a journalist covering the summer Olympics taking place in Berlin. He's to hunt down and kill Reinhard Ernst -- the ruthless architect of Hitler's clandestine rearmament. If successful, Paul will be pardoned and given the financial means to go legit; if he refuses the job, his fate will be Sing Sing and the electric chair.

Paul travels to Germany, takes a room in a boardinghouse near the Tiergarten -- the huge park in central Berlin but also, literally, the "Garden of Beasts" -- and begins his hunt. In classic Deaver fashion, the next forty-eight hours are a feverish cat-and-mouse chase, as Paul stalks Ernst through Berlin while a dogged Berlin police officer and the entire Third Reich apparatus search frantically for the American.

Garden of Beasts is packed with fascinating period detail and features a cast of perfectly realized locals, Olympic athletes and senior Nazi officials -- some real, some fictional. With hairpin plot twists, the reigning "master of ticking-bomb suspense" (People) plumbs the nerve-jangling paranoia of prewar Berlin and steers the story to a breathtaking and wholly unpredictable ending.